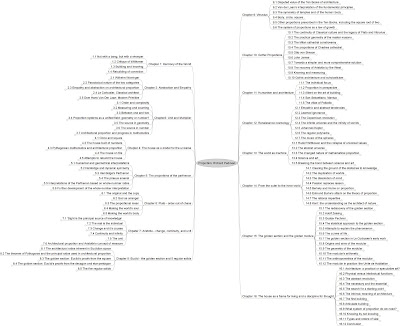 In his book on proportion, Richard Padovan seeks to re-establish the validity and necessity of proportion after certain cultural developments rendered it trivial. The cultural developments that tore down the widespread acceptance of proportion are not as previous scholars had suggested. Whereas Wittkower sees the demise of proportion in the cosmological change initiated by Galileo and Newton, Padovan sees the essential shift away from proportion with the philosopher Hume and the empiricists. Within this context of uncertainty in all human knowledge, Padovan argues for the necessity of proportion in construction and epistemology, thereby re-establishing architecture as a source of knowledge similar to the Greek and Medieval periods.

Wittkower’s argument establishes a link between the created harmony of architecture and the celestial and universally valid harmony. Proportion was a central tenant of this celestial and objectively valid harmony. The entire cosmos of antiquity was seen to be hierarchically ordered and related proportionally, including architecture. The cosmos was seen in terms of perfection, harmony, meaning, unity, and aim.

Wittkower then proceeds to argue that late renaissance cosmology broke with the harmonious cosmology that preceded it, via the works of Galileo and Newton. Padovan presents three objections to Wittkower.

Throughout the book, Padovan often uses the strategy of comparing dates of completion to criticize the connections drawn between the influence of science on architecture, and of architecture on science. One of Padovan’s central points is that throughout history, Architecture influenced culture and science instead of the reverse.

To re-establish architecture as culturally valid, Padovan argues for the necessity of proportion and building. The contemporary cosmology presents a challenge as proportion is seen as individual, subjective judgment. Through the dominance of the individual, subjective judgment Padovan suggests that the world has to be made in order to be known. By building and ordering the world around us proportionally, it is possible to “establish a chain of relationships by which the whole architectonic environment, from a brick to the whole town, can be connected together and made intelligible and humane”. Padovan thusly situates himself within a Kantian mindset, in that “understanding itself is the lawgiver of nature”. He elaborates: “The mathematics of architectural proportion has always been of a kind suited to the forms and techniques of building, and these have changed little in their essentials, even today”. Essentially we know what we make.

Gothic Architecture: My Thesis and Where to Read It